One of the points of this blog is to record for posterity things related to my composing. Composers are obsessed with their legacy... This summer the Lake George Opera does my opera, BUOSO'S GHOST. Looking around the other day on the web, I discovered it wasn't easy to find a synopsis of the opera, so here it is, really for reference:

A sequel to GIANNI SCHICCHI, BUOSO'S GHOST begins with the final bars of GIANNI SCHICCHI. As the sequel begins, we see Lauretta and Rinnuccio, arm in arm, planning their future. Feeling the proud father, Schicchi, looks on. The couple go off to buy their wedding ring. Alone, Schicchi straightens up the house. He sees some food and wine that the relatives have brought and sits down for a snack. But he discovers that the food and drink have all been poisoned by the relations.

He is interrupted by a knock at the door. Two brothers have come to collect on Buoso Donati's will. Schicchi shows them the "revised" document and they leave in shock. Alone, Schicchi imagines the relatives making their plans to poison old Uncle Buoso.

We hear the relatives approaching. Quickly Schicchi scribbles a note and tucks it into Buoso's nightshirt. They have come screaming for blood. Just as they are about to beat Schicchi senseless, a magistrate arrives to try the case.

The relatives immediately assume an air of mourning. Then they angrily accuse Schicchi of murdering uncle Buoso. Schicchi beseeches them for mercy. He sneaks up to each one and tells them that he knows that they have poisoned Buoso's food and drink. They are stunned and worried. They quickly switch gears. Each group of relatives offers Schicchi a bribe if he will blame somebody else, but Schicchi makes no promises.

The magistrate brings everyone back to order. When Old Simone refuses to accuse Schicchi, then the magistrate does it himself. Schicchi defends himself, keeping the relatives on pins and needles. Finally, sobbing he goes over to Uncle Buoso's body and falls on the corpse. He pulls out the note and reads it: UNcle Buoso has committed suicide. All are shocked at this horrible sin. The magistrate is miffed that he can't condemn Schicchi and leaves.

Alone, the relatives realize that Schicchi has outwitted them again. Jokingly, Betto says that they will get the money back in the long run cause Rinnuccio and Lauretta are getting married. They realize they can just kill Schicchi now and inherit everything.

Overhearing this, Schicchi prepares. He hides behind the body and blows out the candles. He summons the ghost of Buoso Donati and scares the family from the house.

In an echo of the end of the Puccini, Schicchi comes downstage and asks the audience to forgive the upstart composer for writing the sequel.
Posted by Michael Ching at 2:03 PM No comments:

NYT Article about stroke victim who learned to talk by singing

Check out this fascinating NYT article about a man who learned to talk again after a stroke by singing.

There is a clip of him talking too which sounds just like recitative in opera. Now we have proof that recitative is good for you!
Posted by Michael Ching at 10:08 AM No comments: 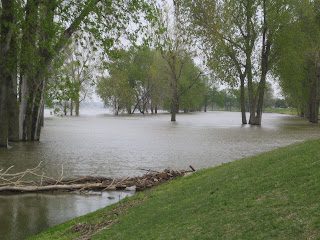 Some of my out of town friends have been concerned that we were flooding here in Memphis. Memphis doesn't really flood. It was smartly located on a bluff, and all the spare water flows over into Arkansas. However, this picture is of the high water near the Mud Island Riverwalk. All of the trees are normally out of the water. You can see from the debris in the lower left of the picture, that it's actually gone down a little bit.
Posted by Michael Ching at 10:04 PM No comments:

Last Friday we had a meeting in New York City with the Director (Larry Marshall) and the Designer (Kris Stone) for our upcoming production of Scott Joplin and Treemonisha. Allison Merritt, our ED/Production Director also attended.

Joplin never got to see his opera performed. As a result there are some awkward parts, which we are going to try to fix. It's a real pleasure to be able to work on a project from the beginning. Most regional opera involves renting other people's scenery, and doing the music pretty much as is. This will be much more interesting.
Posted by Michael Ching at 9:51 PM No comments:

Posted by Michael Ching at 1:24 PM No comments: 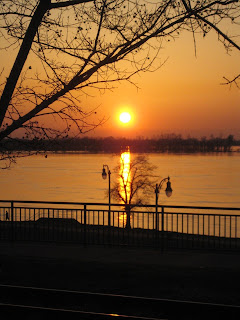 Our party after CENERENTOLA was at the showroom of Number One Beale. As you can see, it has a beautiful view of the river.
Posted by Michael Ching at 8:53 PM No comments: 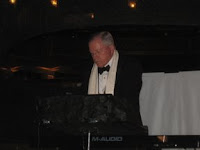 Last night, we had a guest conductor for the Nat'l Anthem and the Overture to CENERENTOLA. Jeff Capwell is a longtime board member and supporter. Before he went into the business world, he was a band director for many years. He did a fine job with the overture.
Posted by Michael Ching at 7:38 AM No comments:

There is a nice feature article about our Cinderella/Cenerentola in the Memphis Commercial Appeal. One of the jobs of a mid sized company is to try to identify and nurture new talent. Rachel is one of the most important young artists to come out of our young artists group.
Posted by Michael Ching at 11:51 AM No comments: 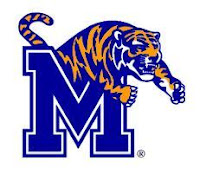 Here in Memphis, even folks like myself who are indifferent to basketball are cheering for the Memphis Tiger basketball team in the NCAA final four.

We contemplated moving our start time on saturday evening from 7:30 to 8:00 pm in order to accommodate the game, which starts a little after 5:00, but this seemed like it might wreak some havoc with families who had decided to bring young children to the opera.
Posted by Michael Ching at 9:50 AM No comments: 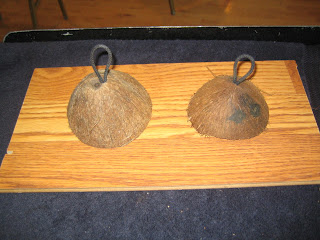 Our principal percussionist, John Sprott, fashioned these coconuts in order to approximate the sound of horses hooves for a section of CINDERELLA.
Posted by Michael Ching at 7:14 AM No comments: