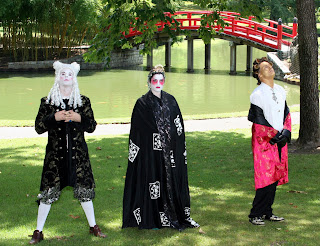 I may have mentioned this awhile back, but after the opening night of TURANDOT on October 13th, a Memphis based band called LORD T. AND ELOISE will be performing onstage after the opera. It is an unusual and decidedly un-purist audience development foray. LT&E do a form of Rap they call Aristocrunk.

Here they are at a photo shoot in the Memphis Botanic Garden with our Box Office Manager, Hillary standing in as Princess Turandot.
Posted by Michael Ching at 3:43 PM 1 comment:

Last night we had our first live on air preview of an opera on our local NPR affiliate, WKNO-FM. For a first time, it came off well. We did sections from the first act of TURANDOT and then had three interview segments. Roy Smith (Calaf) sang a country pop tune he'd written, Lord T. and Eloise--the Aristocrunk group performing after Turandot's opening night--showed up in their full regalia for an interview, featuring the WKNO-FM debut of their song, "Million Dollar Boots," and we ended the show with Memphis diva Kallen Esperian reminiscing about her experiences with the late, great, Pavarotti.

We were surprised at how well our rather mature live preview audience reacted to Lord T. and Eloise...
Posted by Michael Ching at 1:51 PM No comments:

Audrey Stottler, our Turandot, gave a master class this evening to ten talented members of our ensemble. She could not be a greater personality contrast from Puccini's icy princess. By using humor, Audrey made what can be a very tense and awkward situation (public criticism) into a rewarding, educational, and even entertaining session.

She was not shy, not afraid grab the participants by the jaw or the back to calm or reinforce. She said that tempo in verismo was like the ample elastic band in men's underwear--with lots of stretch...

One of the most wonderful elements of her class was how Audrey was able to get the participants to work together and not in competition. She brought students back onstage to help with issues of support, posture, and breathing, and was constantly referring back to previous participants as the class progressed.
Posted by Michael Ching at 7:45 PM No comments:

Turandot chorus staging started today for our Opera Memphis production, October 13 and 16. Typically, only a small minority of props used in rehearsal are used in the actual performance.

These are benign imagibricks used to represent heads on poles.
Posted by Michael Ching at 1:34 PM No comments:

As mentioned elsewhere, a group called Lord T. and Eloise is going to do a performance of their "Aristocrunk" music onstage, in front of the Turandot set, after the October 13th performance. I have posted a question at nfcs.net about a group or performer to engage next season--preferably one who might have some affection for Opera. Here are some of the suggestions so far. We hear that most of these folks have at least a passing interest in opera.
Linda Ronstadt
Kristen Chenoweth
Jewel
Bono and U2
Sting
Prince
Celine Dione
Harry Belafonte
Aretha Franklin
Stevie Wonder
Michael Bolton
Freddy Mercury (but he's dead...)
Alexa Joel (Billy Joe's Daughter)
Christina Aguilera
Phoebe Snow
Jill Scott
Nneenna Freelon
Diana Krall
Jubilant Sykes
Elvis Costello
John Legend
Alicia Keyes
Arcade Fire
Broken Social Scene
Posted by Michael Ching at 3:37 PM 1 comment:

We start Turandot here soon in Memphis. I need to get my camera working...

Princess Turandot, Audrey Stottler
New to Opera Memphis, she's done the icy princess all over the world.
The Emperor Altoum, her father, William Heuttel
A former board member, Billy sang leading roles with us in the 1960s!
Timur, the dispossessed King of Tartary, Jason McKinney
A North Carolinian who was Ferrando in last season's TROVATORE.
Calaf, Roy Smith
Last seen here about eight years ago, Roy has scored a big success in Vienna as Calaf
Liu, a young slave-girl, Kaori Williams
A wonderful new face
Ping, Grand Chancellor, Scott Guinn
A former artist in residence
Pang, General Purveyor, David Hamilton
The Artistic Director of Fargo Moorhead Opera who did a great job as Meriwether Lewis--you can see pictures of David in this blog
Pong, Chief Cook, Joseph Hu
A fine tenor I last worked with in a MAGIC FLUTE many moons ago in Nashville.
Mandarin, Sean Cooper
A great baritone who is, fortunately for us, getting an advanced degree at University of Memphis
Posted by Michael Ching at 1:55 PM No comments:

My most interesting Luciano Pavarotti story

When I was on the staff of the Greater Miami Opera (now Florida Grand Opera) in the early 80s, folks like Pavarotti came with great regularity. They would not generally come for the whole rehearsal period, but for perhaps a week to a week and a half before opening. The company did a MASKED BALL with Pavarotti--Emerson Buckley, the artistic director back then was one of the tenor's favorite conductors and went with him frequently on the road. There were BALLO performances in three places, Miami, Miami Beach, and a challenging last performance up in Fort. Lauderdale. The Ft. Lauderdale location was much smaller than the two Miami locations, so many artistic compromises had to be made and the show was put up without a spacing rehearsal up there. Pavarotti sang fabulously and, as you may know, the tenor dies at the end of the show. Well, he died on the wrong side of the curtain and it came down, with him looking like a beached you-know-what. The curtain came back up a few feet, Pavarotti rolled under it, and the curtain came back down.

Frankly, working with people like Mr. Pavarotti drove me into regional opera where the budget are smaller, but he egos are too and where everyone collaborates and pulls his own weight. But
I view this as a positive lesson and still appreciate the opportunity to have been around productions with the likes of him.
Posted by Michael Ching at 12:16 PM 1 comment:

Our Brave Colleagues at Playhouse on the Square have done the first American production of JERRY SPRINGER: THE OPERA.

The Opera Memphis staff went to see it last night. It is a sophisticated rock opera. One of the best things about it was its fast pace. The first act was more or less a setting of vignettes that seemed identical to those on the show--guests with "can you top this" problems" and an mob/chorus out for an afternoon's thrill. After Jerry's warm up man shoots him, the second act is more theological, with an argument between Jesus and Satan over Jerry's immortal soul.

Playhouse did a terrific job with the show. As a show it left me reasonably entertained but with little desire to see it again. I doubt if opera houses will be clamoring for it any time soon. Perhaps the fact that Playhouse has managed to do it without being threatened or picketed will make other theater companies brave enough to perform it.

The dragging of opera through the muck of Springer left me feeling mildly in need of a bath or at least a febreezing. Still it was good to see the emotionally magnifying quality of our art form put to an interesting use.
Posted by Michael Ching at 8:50 PM 2 comments: