Amarillo Opera has its s*&t together! 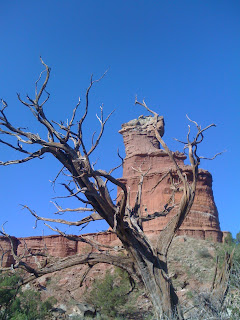 Amarillo seems an unlikely place for opera. But after seeing a very nice production of BUOSO'S GHOST here a few years ago, I accepted an invitation to conduct Butterfly here. They are using an elaborate set from Santa Fe--a really big production for a regional company. And so far so very good. That the cast is good is not much of a surprise. There are more good people than work to go round these days. But what has been surprising is the excellent and excellently prepared chorus and a Trouble who is going to be terrific. Nice rehearsal spaces, a fine director (Marc Astafan) who tells good stories onstage, and a willing and able rehearsal pianist and stage manager.

Oh, and the nearby scenery (Palo Duro Canyon above) is spectacular. Why don't they tell you to take a left at the picnic bench in order to go up to the Lighthouse, pictured above?

Amarillo has great Mexican over at La Campana on Canyon Drive (Chicharron Burritos!) and up at the Mercado Latino (Tripe tacos!) on Amarillo Boulevard. There is an incredibly talented coffee roaster at Evocation Coffee. I also got to sit in on a songwriter evening hosted by Mike Fuller of High Plains Public Radio. Sometimes they play Americana instead of classical, so I'll be tuning into them from time to time on the internet. Do I sound like a tourist instead of a guest conductor? Well, I have done Butterfly a few times...

One of the sobering things is that I am now the oldest guy in the rehearsal room instead of the youngest. I guess I should make that the subject of a whole blog entry sometime.
Posted by Michael Ching at 7:08 PM No comments: