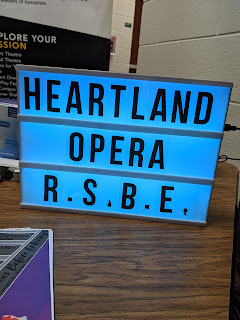 Earlier this month, I went to Joplin, MO to participate in RSBE #6 at Heartland Opera Theatre/Missouri Southern State University. It was a joyous experience to be back live. There was one issue and it wasn't COVID... It was snow! Joplin got hit with 4+ inches of snow and the temperature went down after. It stuck around for three days, causing the 1st dress and final dress to be cancelled as well as the opening night. We managed to open for two performances which played to quite nice houses. 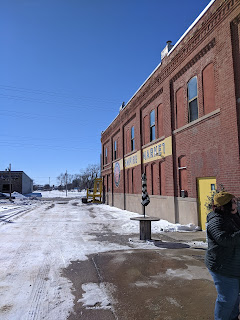 Lingering ice in Joplin on Saturday after the
Wednesday snow

RSBE is built to be expanded, like it's predecessor SPEED DATING TONIGHT! We premiered one new piece in Joplin, "What I had to do."

I always ask casts to let me know if they have any ideas for new songs and one brave cast member, Faith Escobar, told me how she likes to hide in her room with old sitcoms and movies. She says they help portray a happier and less troubled world and help her get back out into the thick of it. It was an inspiring idea, and one I'd never have gotten on my own. "Hide with the TV" will be #19. Here's the demo.

While in Joplin, I went down to see George Washington Carver's boyhood home. It was an inspiring place, made special by the coat of snow. 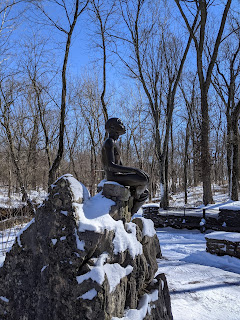 Posted by Michael Ching at 12:07 PM No comments: