This post is strictly for folks in the business, so if you are looking to see what's up in my life, pass on by!

For the upcoming 2023 production of LA BOHEME at Fargo Moorhead Opera, I have made rehearsal mp3s for the chorus. They are available for anyone to use at my soundcloud site. They don't include 100% of the chorus bits, but all of the major ones. Once you get to the soundcloud site, you'll want to hit the playlist tabs. There are usually six mp3s in each set--children, soprano, alto, tenor, bass, and tutti.

Of particular interest will be decisions I made at the beginning of the act and the end of it. The original has all sorts of sub groups of singers, with a large chorus creating the hustle and bustle of Paris at Christmastime. Most regional opera companies will do this same act with, maybe 30 choristers, and dividing the half dozen baritones and basses, for example, really will just thin them out too much. So the idea has always been to have folks sing as much as possible, call and response, antiphony be damned.

One of the other challenges is the children's chorus. Traditionally, some of the female singers are assigned to double them. This has been worked into what's been done here so it can be learned in advance and with assurance.

So if you are interested and in need, feel free to use these files at the soundcloud site AND download the pdf files for the opening and closing of the act.

If you end up using these, I'd appreciate an email.

Posted by Michael Ching at 2:27 PM No comments: 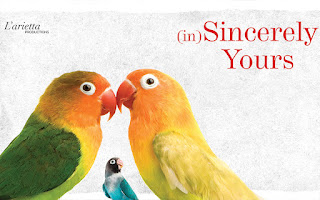 DINNER 4 3, my mini opera with librettist Deborah Brevoort, plays in Singapore on December third. It plays with Tony Solitro's SHE'S FABULOUS and Samuel Barber's HAND OF BRIDGE.
Commissioned by Fargo Moorhead opera as part of the Decameron Opera Coalition, DINNER 4 3 premiered online during the pandemic. This will be its first live production, which will be followed by a live version in Fargo later this year.
Thanks L'arietta productions!
Posted by Michael Ching at 8:59 AM No comments: