Three Down, three to go 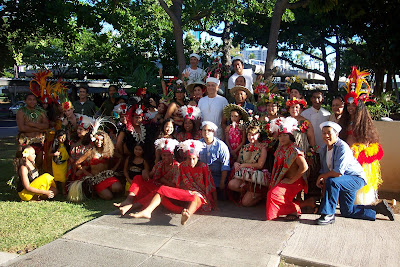 The Saturday and Sunday performances were stronger than opening and the audience response has been good. This is the chorus with some of the Tahitian dancers.
Posted by Michael Ching at 3:39 AM No comments: 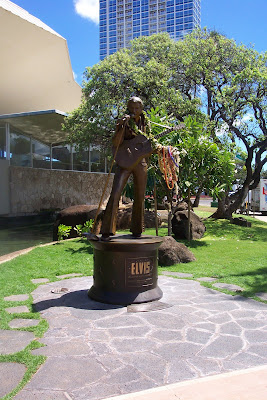 This is a new statue of "The King" that has been put up this week outside the Blaisdell Center where Elvis played in the seventies. South Pacific is in the concert hall in the same complex.
Posted by Michael Ching at 3:35 AM No comments:

Tenor Arthur Espiritu was scheduled to appear twice in Opera Memphis' 2007-2008 season, first as Pang in TURANDOT and then as Prince Ramiro in CENERENTOLA on April 5, 6, 2008. But La Scala called. Actually, Espiritu made it to the final round this summer at the Belvedere Competition, an international competition for promising singers in Vienna. After one of the competition rounds, a representative of the famed Italian opera house approached him and they planned to fly him to Milan the next day for a stage audition. "I had to find a music store in Vienna and buy a score to COSI FAN TUTTE for sixty Euros. I had covered the role at the Pittsburgh Opera, but had to study hard, because they wanted to hear the arias and some recitative." The audition panel was a distinguished one, including Mirella Freni, Teresa Berganza, and Luigi Alva. As a result, Arthur will get eight performances of Ferrando, four at La Scala and four at the associated Teatro Piccolo. In order to do this, Opera Memphis has had to release Arthur from his contract to sing one of the councillors, Pang, in TURANDOT. But his La Scala debut is sure to raise the interest level of our audience when he comes to Memphis in March/April to sing in LA CENERENTOLA.

This exciting debut is a bright spot for Arthur, whose family home in Chalmette, Louisiana was destroyed by hurricane Katrina. Arthur lived in New Orleans for sixteen years, but does not anticipate being able to move back there. He currently resides in Phoenix.
Posted by Michael Ching at 2:36 PM No comments:

Opening performance--enthusiastic audience. It was, I think, a relief for the performers to be able to deliver their dialogue in front of an audience.

Over at the Honolulu Advertiser site, there is an article about the show by Wayne Harada.
The article focuses on Marlene Sai, our Bloody Mary. Since being discovered by Don Ho at eighteen, Marlene has had a full and storied career here as singer and actress.
Posted by Michael Ching at 1:12 PM No comments: 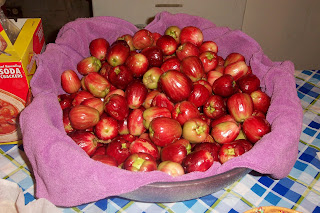 Last night's final dress went well. The audience was responsive and most of the balance issues have been fixed.

These are mountain apples, which look like apples, but actually have the texture and look of very mild pears. They say they are too fragile to be commercialized.
Posted by Michael Ching at 3:13 PM No comments: 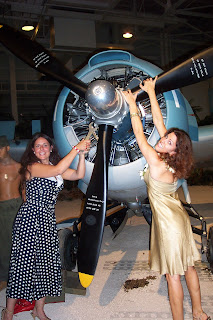 Today's focus was an evening event at the Pacific Aviation Museum. The World War II era planes made a great backdrop to talk about the show.

My brief speech was about "Some Enchanted Evening" which was a number one hit in 1949 for Perry Como and was also recorded by Bing Crosby, Frank Sinatra, and Ezio Pinza--all in the same year. Alas, big hits do not come out of Broadway any more, let alone opera.
Posted by Michael Ching at 1:10 PM No comments:

Last night we had the first orchestra dress rehearsal. There were some challenges with the balances between pit and stage, in finding a level of sound enhancement that is true to an "acoustical" feel vs. a canned, miked one. Connie, the harpist, came in from a visit to the mainland and despite having missed the first two rehearsals, and fighting looming jet lag, she did a near perfect job.
Posted by Michael Ching at 3:45 PM No comments: 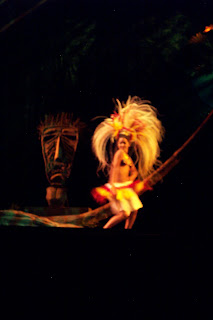 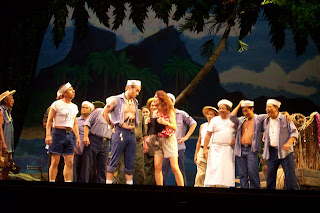 Today we had our first rehearsal with costumes. It was a very smooth one--no train wrecks. We also had an orchestra rehearsal with singers, so it was a long day. As you can see, it is going to be a good show. I actually took these photos from the orchestra pit during the run through.
Posted by Michael Ching at 4:10 AM 1 comment:

Yesterday we had our first orchestra reading. Norman Foster, who is the first clarinetist, makes musical cards. Here's the link. 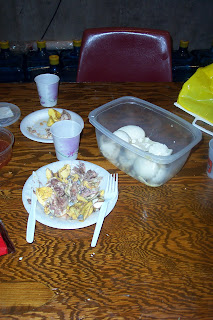 After speculating that this delicacy was not available in Hawaii, I ran into balut (fertilized duck eggs) at a local market. The lady explained that you should boil them for thirty to forty minutes and after she sized me up, she said, "you should cook them forty minutes."

Several of us tried these after rehearsal. The taste was a combination of hard boiled egg yoke and liver--definitely rich. The texture was a bit acquired...

Several of our Filipino colleagues in the ensemble said that even they weren't willing to give balut a try, in spite of it being a national delicacy in the Philippines.
Posted by Michael Ching at 5:26 PM No comments: 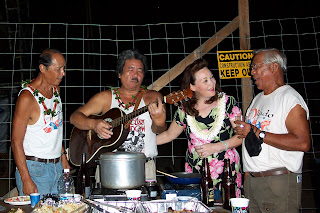 One of the truly wonderful things about Hawaii Opera is the community created by the chorus which tailgates after every rehearsal. The tailgates get larger and larger and by the time we reach the performances they become full scale parking lot luaus. This is actually a picture from a tailgate after THE MIKADO a few years back.
Posted by Michael Ching at 1:11 AM No comments: 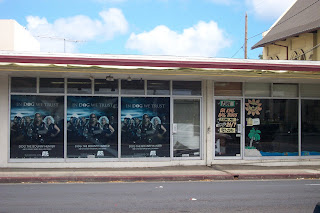 Clueless classical musician that I am, I would not have known about Dog the Bounty Hunter were it not for my enthusiastic Opera Memphis colleague, Michelle. Thanks for keeping me au courant on a bit of popular culture, Michelle!
Posted by Michael Ching at 1:06 AM No comments: 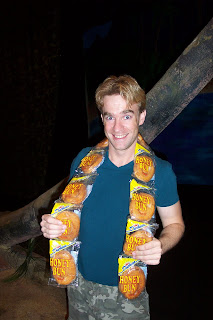 This is the talented singing actor Curt Olds with a lei made of North Carolina Honey Buns--a play on words with the song from the second act of SOUTH PACIFIC. Curt is Luther Billis in the show. He played Njegus at Opera Memphis a couple years ago in THE MERRY WIDOW.
Posted by Michael Ching at 1:03 AM No comments: 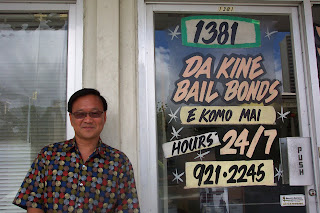 After a very chic lunch at a great new restaurant called Stage we went to check out Dog the Bounty Hunter's bail bond office in downtown Honolulu. The place is staffed by his family. Around the corner there was a souvenir shop. While we were there, burly young male fans kept coming in to buy T-shirts.
Posted by Michael Ching at 12:47 AM No comments:

We are in the theatre! 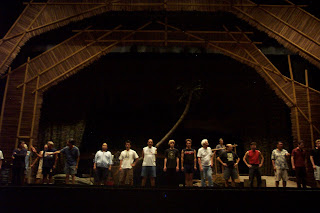 At last we are in the theatre. The first rehearsals in the theatre are for spacing--translating what was done in the rehearsal hall into the actual space. There are portals, levels, and scenery to be worked with now. All in all, it is a very tedious rehearsal for the conductor--hence my ability to blog from the pit while they do their work onstage.
Posted by Michael Ching at 1:01 AM No comments: 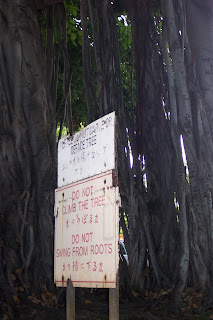 Hawaii has beautiful banyan trees. This one is on the grounds near the Iolani Palace. Banyan trees put down roots from their branches and grow to huge dimensions.

Would be Tarzans are warned not to swing from the branches of this particular tree.
Posted by Michael Ching at 12:58 AM No comments:

Moving to the theatre

Yesterday we had the final rehearsal in Hawaii Opera's cramped and hot rehearsal space. We are ready for the theatre at the Blaisdell. This production has a remarkable touch--a drop in performance by Manutahi Tahiti which is a group of Tahitian dancers. Check out their mission at their website. I will post pictures of their very exciting work, which really amplifies the "South Pacific"ness of this production.
Posted by Michael Ching at 3:23 PM No comments: 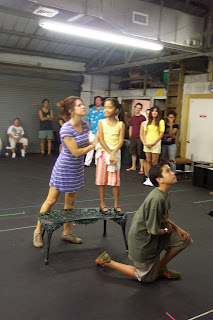 Nellie rehearsing with Ngana and Jerome. In the book, they sing Au claire de Lune, mon ami Pierrot.
Posted by Michael Ching at 9:34 PM No comments: 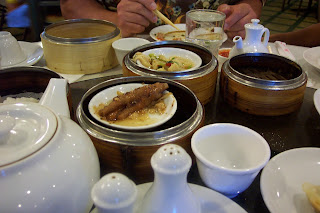 Legend is a dim sum restaurant... One of the best in Honolulu. That is a chicken foot, a gelatinous and slightly chewy delicacy. The taste is great, the texture is acquired...
Posted by Michael Ching at 9:30 PM 1 comment: 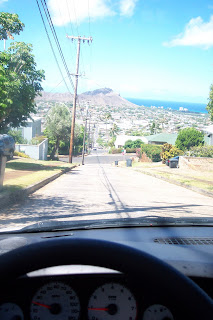 This street is called Wilhelmina Rise. The picture cannot begin to describe the feeling of driving up and down this steep street. That's Diamond Head in the background.
Posted by Michael Ching at 9:26 PM No comments:

Our dance captain, Celia Chun explained to me today that she was under the weather yesterday because of Vog. Over on Hawaii, the volcano is erupting, and when the wind blows the right way, dust and ash from the volcano blows over the islands, causing allergies and asthma attacks. They call it vog.
Posted by Michael Ching at 7:32 PM No comments:

Race is the dilemma the drives the plot in the R&H adaptation of Michener's TALES OF THE SOUTH PACIFIC. Lt. Cable wants to marry Liat, but feels he musn't; Nellie Forbush is shocked when she finds that Emile De Becque has had two children with a Polynesian. Michener's book is quite frank about it:

"But before her were other indisputable facts! Two of them! Emile De Becque, not satisfied with Javanese and Tonkinese women, had also lived with a Polynesian. A nigger! To Nellie's tutored mind any person living or dead who was not white or yellow was a nigger. And beyond that no words could go! Her entire Arkansas upbringing made it impossible for her to deny the teachings of her youth. Emile De Becque had lived with the nigger. He had nigger children. If she married him, they would be her step-daughters."

The good news is that Nellie, like Hawaii, has worked well past this thinking, but one wonders what this does to the contemporary audience for South Pacific. Will they find this part of the plot--this sociocultural dilemma--to be dated?
Posted by Michael Ching at 11:14 AM No comments: 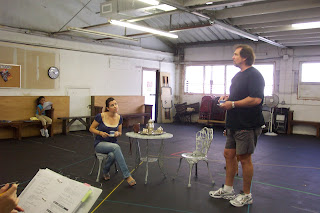 Michelle Jennings and Louis Otey are the Nellie Forbush and Emile DeBeque. They have great chemistry and are both very strong.

This is in the opera's rehearsal room.
Posted by Michael Ching at 11:49 AM No comments: 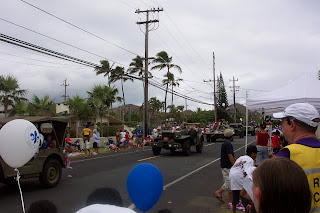 The 4th is celebrated here like anywhere else--with parades and fireworks. This is a parade in Kailua.

If anything, the Asian influence makes for fireworks everywhere on the fourth.
Posted by Michael Ching at 1:42 AM No comments:

Chandeliers in the shop 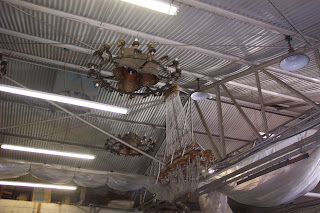 Hawaii Opera has its shop, office, and rehearsal facilities in a single location.

The artisans in the shop are spiffing up the South Pacific set.
Posted by Michael Ching at 12:32 PM No comments: