Debate: "Night at the Opera"

I suppose it was only a matter of time before the debate at the Opera was compared to the Marx Brothers Movie. There certainly was a colorful cast of characters. I've always believed that although opera has some weird associations--the Marx Brothers, the fat lady singing--at least it has some. Strange stereotypes are better than none at all.
Posted by Michael Ching at 4:01 PM No comments: 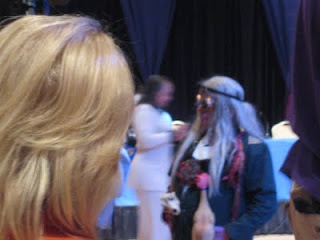 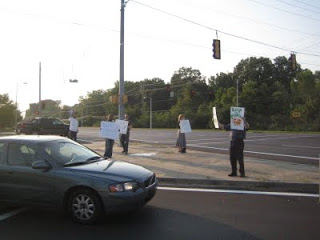 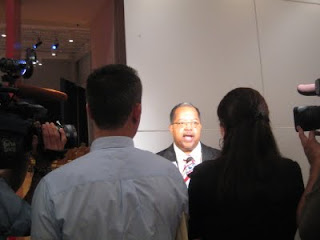 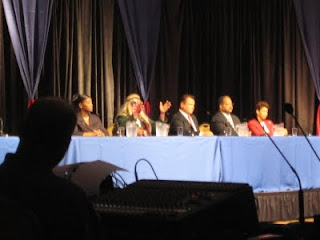 For the night, the opera's headquarters was the focus of Memphis as nine mayoral candidates debated. There were a few protesters outside encouraging the candidates to focus on the issues. For those who aren't from Memphis, the cast of characters included a strange perennial candidate, Robert "Prince Mongo" Hodges, who looked liked he walked off the set of some voodoo Samson et Dalila. His ranting did not detract from the seriousness of the debate as we move from the long reign of mayor Willie Herenton, whose administration started out so promisingly and ended in unpredictable strangeness.
Posted by Michael Ching at 9:05 AM No comments: 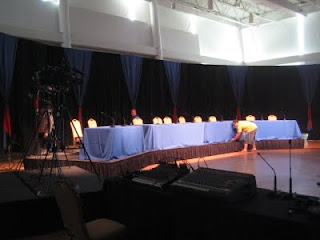 An interesting post related to the Honolulu Symphony's struggle to survive. While the accusation that a symphony is nothing but a glorified cover band isn't fair, it does make you wish they had a more regular commitment to new music. (Opera companies are no better, mind you.) Thanks to Honolulu Symphony member and friend, clarinetist Norm Forster for pointing this out.
Posted by Michael Ching at 11:21 AM No comments:

Wanna be mayor of Memphis?

We are extremely proud that Opera Memphis is going to be one of the parter/hosts of the upcoming debate for the Memphis Mayoral Special Election. Read the rules and sign up (just kidding). The debate will be televised on WMC-TV.
Posted by Michael Ching at 10:18 PM No comments: 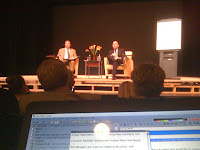 This morning, the Kennedy Center's Michael Kaiser spoke to Tennessee arts management professionals in Nashville. The impresario has an impressive track record, including the Kansas City Ballet, Alvin Ailey Dance Company, and the Royal Opera House. The most useful advice I got from his talk was to plan further ahead--gives you more time to excite your constituencies--and to do more "Institutional Marketing"--building the reputation of the organization, and not just its productions. He also said that arts organizations should not retreat from adventurous programming during challenging times.

All in all nicely inspiring and worth the six hours of driving. Yesterday, I heard someone say that Memphis has the third largest number of trucks passing through it, and today on I-40, I could see that was likely the case.
Posted by Michael Ching at 9:04 PM No comments:

New Theatre at Playhouse on the Square 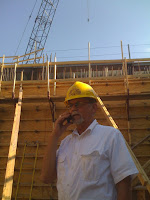 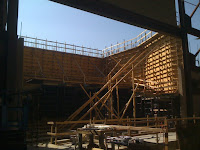 Memphis' professional theatre Playhouse on the Square is building a new theatre which will be open in January. Jackie Nichols is their founder and executive producer.
Posted by Michael Ching at 8:57 PM No comments:

Labels: Playhouse on the Square Memphis

Rocco Landesman has been confirmed as the new Chair of the NEA. For the past several years, the NEA has tried to quietly build and generally avoid controversy. A brash and confident New York producer, that doesn't seem to be Landesman's style. Of particular concern is a recent statement that implies he is going to value artistic excellence way, way more than geographic distribution:

"I don't know if there's a theater in Peoria," he says, "but I would bet that it's not as good as Steppenwolf or the Goodman," he said, referring to two of Chicago's most prominent theater companies. "There is going to be some push-back from me about democratizing arts grants to the point where you really have to answer some questions about artistic merit."

I am all for artistic merit. But if that is taken too far, all the funding is going to end up going to 5% of the arts organizations, groups that already get probably 75% of the funding. You can read a comment I made about it on Lee Rosenbaum's blog, Culturegrrl.
Posted by Michael Ching at 10:38 AM 1 comment:

The consciousness of the conductor 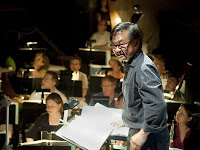 I conducted my first opera in 1986. So it was something of a surprise for me that during the rehearsals and performances of LUCIA at Opera New Jersey I felt like I had learned something from working with the New Jersey Symphony. NJSO has a fine reputation and Opera New Jersey was very excited to have them as partners in the orchestra pit.

During the final rehearsals and performances, I placed my consciousness in a different place than I usually do. I was certainly performing "in the moment" a great deal of the time, but I came in and out of it--rather like a swimmer going under the water, but also coming up for air and looking around. LUCIA has moments that require one to "perform" but there are also plenty of pages in the score where the orchestra musicians do the heavy lifting and the conductor can go on autopilot for several bars at a time.

So, rather than constantly focusing on myself, on my performance, I was alternating between my performance and the performance of the many musicians. They, after all, are making the music. This moving in and out, allowed me greater freedom to communicate with the orchestra. If it were sports, it would be rather like being a player/coach or alternating between the roles of player and coach. It is not that I hadn't done this before, but that I did it with great frequency during the performances and dress rehearsals.

Another way I might describe it is like being a commercial or fashion photographer. You have set up the scene according to your concept, but you are also dealing with a group of folks who need to be inspired. The conductor is shaping the music which is moving through time and not only are you providing clues as to its future shape--the beat patterns, the cues--but also some sense of how it's going. In this way, I was able to provide a great deal of instantaneous, well deserved positive feedback as the performance went along, which, along with a certain amount of confidence in my cuing and shaping of the phrases, created a very effective feedback loop between all involved in the performance.

Yet another way to describe it might be working with glass or clay. Like those two media, the music is shaped and changed by physical gesture and the kinetics have to be combined with real time information, in this case from the musical sounds created by the singers and orchestra.

The result was generally and aggressive and tight performance which we all seemed to enjoy and the audience enjoyed too.

I haven't seen much on the web about the consciousness of the conductor, so I will seek some responses from some colleagues....
Posted by Michael Ching at 2:05 PM No comments:

I've been busy preparing for our production of COSI FAN TUTTE in Memphis. One of the things that has to be done fairly early is deciding what music to leave in and what music to cut. Without cuts, COSI might be nearly four and a half hours long and three hours is about my limit. So I've used the blog format to create a cut list for the opera.
Posted by Michael Ching at 10:20 PM 2 comments: