A MIDSUMMER NIGHT'S DREAM, this time with orchestration 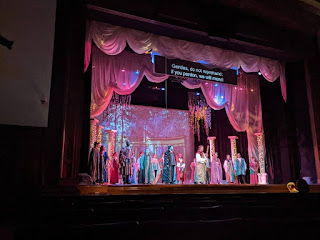 Thanks to Courtney Kalbacker, the intrepid and enthusiastic opera producer and teacher at Towson University, my version of A MIDSUMMER NIGHT'S DREAM had its first production in ten years. Originally premiered in 2011 with an all a cappella voicestra in the pit, it's been perceived--perhaps correctly--as very difficult to produce. Now, with a small orchestration of eight winds, much of the difficulty has gone away. These winds, along with a keyboard, keep the voicestra on pitch, but still allow the show to retain its a cappella character.

COVID provided much drama, but the double cast group of 57 managed to have only one drop out due to the pandemic.

This is, IMO, my best work and I have Jay Mednikow and DeltaCappella to thank for it bringing it to life and making the cast recording, along with Opera Memphis and Playhouse on the Square for the 2011 production. I now have Courtney to thank for seeing the potential in MIDSUMMER as a perfect work for midsized university opera programs.

You can get the piano vocal perusal score here (an autodownload) and there will be video samples available soon.

Posted by Michael Ching at 1:13 PM No comments: