Opera in News of the Weird

Alas, Opera made Chuck Shepard's News of the Weird this summer. If you want to see the depths that this sunk to go to google images and type "Kreskin Maskenball."

Posted by Michael Ching at 9:16 AM No comments:

Labels: Opera in News of the Weird 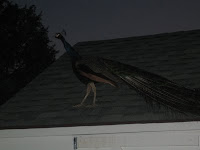 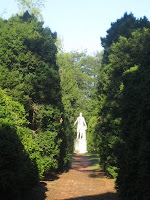 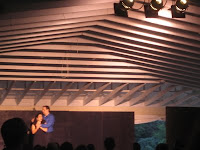 Made a quick stop at the Ashlawn Highland Opera Festival for some auditions and to hear a scenes concert. Near Charlottesville, the opera performs on the James Monroe estate, up the hill from the more celebrated Monticello. An outdoor festival, the singers sometimes compete with the buzz of cicadas and the cries peacock for attention.
Posted by Michael Ching at 9:27 PM No comments: 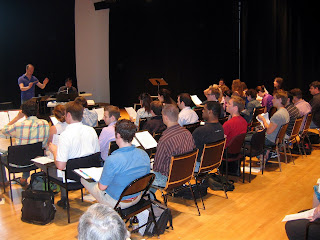 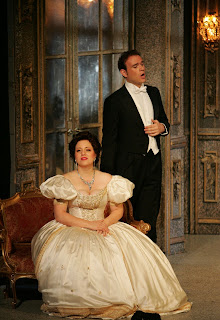 On the way back to Memphis, I stopped off at Opera New Jersey in Princeton. They were kind enough to lend me their young artists and their chorus master Keith Chambers to do a reading of about fifteen minutes of my a capella setting of MIDSUMMER NIGHT'S DREAM. While there I also got the chance to see Elizabeth Caballero and Michael Fabiano sing TRAVIATA and Jennifer Aylmer sing Hanna Glawari in THE MERRY WIDOW.

And no opera lover should ever go anywhere near Princeton without stopping at the Princeton Record Exchange to look over the vast selection of used opera CDs.

More about the reading later. 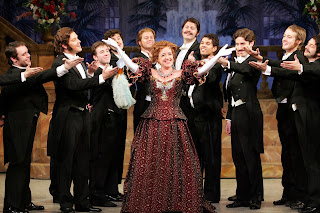 Not to be a Bore/Boor

While driving from Glimmerglass to Opera New Jersey, I heard Nicholas Carr talking about his essay in the July/August issue of THE ATLANTIC. Carr worries that google and the internet are changing the way we read--that we are becoming a nation of skimmers. He cites a colleague who says he has "almost totally lost the ability to read and absorb a longish article on the web or in print." He says we may be losing the ability to read "deep."

It is a worry for us who work in music's longest form. Is the audience losing the ability to "listen deep?" I know that I have one of the shorter attention spans in the opera business--a long opera can put me to sleep in the theatre, even if I am excited about it. It makes me into an artistic director always on the look out for musical cuts, in order not to test the audience's patience.

On the other hand, some long operas were written for another era. When it took a long time to get to the theatre, the length of the entertainment needed to be worth the trip. Plus it is clear that often audiences weren't really paying full attention to the recitatives--they were waiting for a pretty aria to pull their attention back from their box seat to the stage. Honestly, that's the way we watch sports and no one has any issue with that.

I tend to be an optimist and feel that shorter attention spans simply mean that artists need to do a better job at entertaining and intriguing and that often, being longwinded is just being a bore/boor. Opera is a special opportunity for deep listening.
Posted by Michael Ching at 6:29 PM No comments: 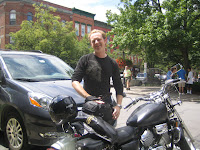 On a quick visit over to Glimmerglass, I got a chance to catch up with tenor Ryan MacPherson. He has sung four engagements with Opera Memphis and is singing Luzio in the Glimmerglass production of Wagner's early opera DAS LIEBESVERBOT. Here is Ryan on the streets of Cooperstown with his bike.
Posted by Michael Ching at 5:44 PM No comments: 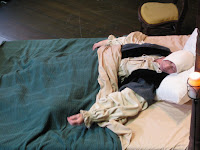 An enthusiastically received second performance and it's time for Uncle Buoso to rest in peace for a bit. This performance has given me a chance to check both the piano vocal and orchestral materials for errors, so its now time for a bit of homework so a final version can be made.

This picture is of our very talented dead Uncle B. Patrick Hussey, who in real life is the Shihan of Tenkara Karate in Saratoga Springs.
Posted by Michael Ching at 5:57 AM No comments:

A bit of Hawaii 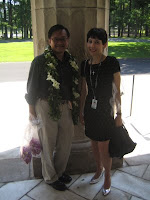 Special thanks to old friend Becky Ikehara for coming to the second performance by Cessna and for bringing a beautiful Maile lei.
Posted by Michael Ching at 5:46 AM No comments:

The lawn jockey is to Saratoga Springs what a garden gnome is to England. They are everywhere and they are in all sorts of colors and conditions. They are displayed prominently right at curbside, or they are nearly obscured by plants. Right handed, left handed; colorful, drab. Large, elaborately painted horses now compete with the jockeys for attention. 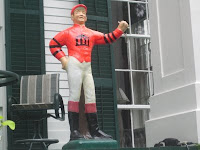 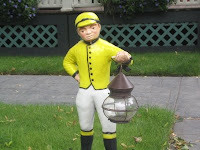 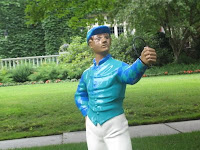 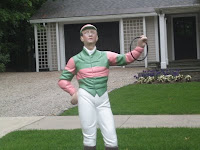 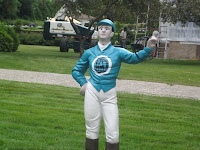 Posted by Michael Ching at 1:06 PM No comments: 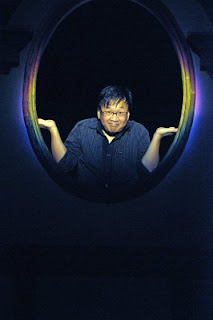 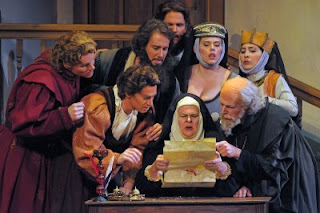 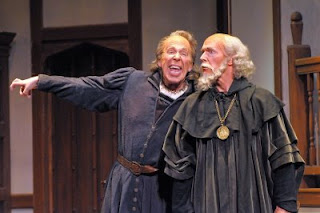 Posted by Michael Ching at 9:29 AM No comments: 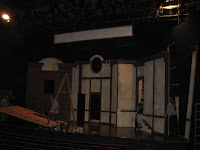 The repertory schedule at Lake George Opera necessitates quick changes from one set to another. On the day of the final dress of SCHICCHI and BUOSO, the crew had to change from a matinee performance of TRAVIATA in only about three hours.
Posted by Michael Ching at 8:24 AM No comments: 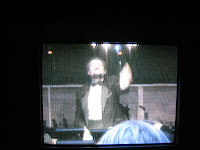 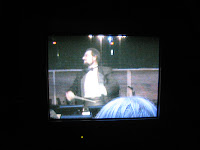 Singers and stage managers keep up with the conductor through a monitor system. This is especially important at Lake George Opera, where the conductor is behind and above the singers. Here are two shots of Mo. Mark Flint conducting TRAVIATA.

As our friend and colleague and stage manager Allison Merritt points out, one has to be very careful what one does when one is put in front of a camera for hours at a time.
Posted by Michael Ching at 8:20 AM No comments: 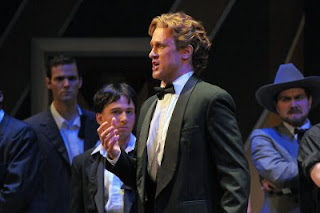 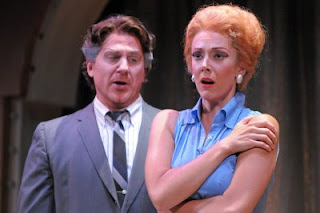 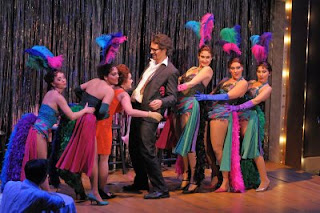 Three shots here, courtesy of Lake George Opera, from their Traviata in Vegas. With the orchestra behind the stage on a platform, the acoustics in the Spa Little Theatre are fantastic for opera. Frankly, it's loud and in-your-face like no other theatre. I think more opera ought to be done this way and Lake George should be very proud of its venue and their solution to using it.

Elizabeth Roberts, Mark Schreiner, and Kelly Anderson are a great cast.
Posted by Michael Ching at 1:02 PM No comments: 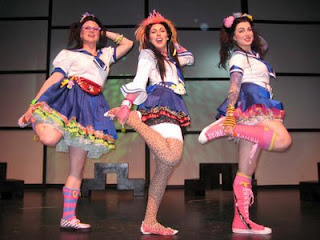 Saw a lively MIKADO at the Seagle Colony in Schroon Lake, north of Saratoga and Lake George. It was an irreverent, contemporary approach. I was amazed at the amount of dancing that the director, John de los Santos, managed to get from his young cast. The "little list" was an equal time slam at Bush, Clinton, Obama, and McCain.

I could have done without the reference to Hiroshima and Nagasaki, but it was a very small sour note in an otherwise terrific, energetic production.
Posted by Michael Ching at 5:54 PM No comments: 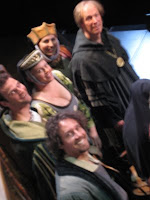 Some of the dysfunctional Donati family at piano dress rehearsal.
Posted by Michael Ching at 10:22 AM No comments: 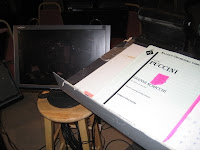 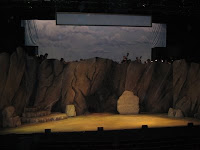 The Spa Little Theatre where the Lake George Opera plays does not have an orchestra pit. Instead, there's a sort of "orchestra loft." You can see the orchesra above the stage set for the opening of PIRATES OF PENZANCE. The conductor views the stage with a TV monitor near the stand.
Posted by Michael Ching at 5:24 AM No comments:

Article on Schicchi/Buoso in the Saratogian

"Memphis Opera’s Michael Ching was sitting at a breakfast table in Chicago about 15 years ago when the conversation turned to the question of what happens to opera characters after an opera is over...(link)"
Posted by Michael Ching at 8:09 AM No comments: