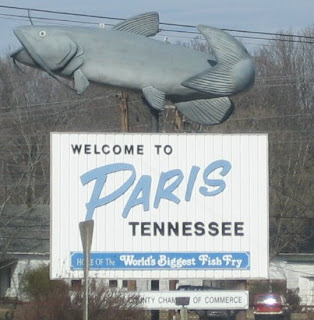 The road from Memphis to Murray, Kentucky goes through the small cities of Milan (My-Lan), McKenzie, and Paris, Tennessee and then on up north to Murray which is just across the TN/KY border. On the highway north of Paris is a sign that says "We Don't Rent Pigs." I mentioned it at my audition class and one of the students recalled having seen it too.

Alas, I didn't get a photo of it, but I did get a shot of the welcome sign going into Paris with its very robust catfish... er poisson-chat.
Posted by Michael Ching at 9:57 PM No comments: 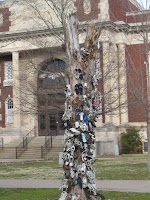 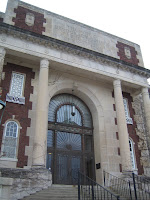 Murray State is in Southwestern Kentucky. They have a harmonious voice faculty (somewhat unusual, that) and I heard some very good and well prepared student singers. The impressive facade is their old library and the tree with the shoes is a campus tradition.
Posted by Michael Ching at 9:43 PM No comments: 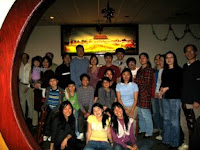 A group of folks from the Chinese community gathered to celebrate and meet Vienna Teng.

She is immensely talented and has the real potential to be a major artist some day. She sang a couple of songs and talked about her career and move from computer science into music. One of the headliners at the Folk Alliance conference, she was very gracious and generous with her time. For me, it was great to meet some students who already knew about her.

Asian Americans are very prominent in many fields, but not in some of the most visible ones--film, pop music, national politics to name a few... It would be a cultural milestone if she can climb the heights of the pop music biz.
Posted by Michael Ching at 3:13 PM 1 comment:

More Outreach with the Folk Alliance 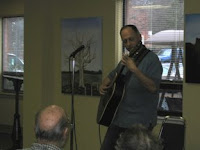 Marc has a very interesting project--"Stroke of Genius." Marc set to music the writings about the experience of a stroke victim.
Posted by Michael Ching at 3:10 PM No comments:

Outreach with the Folk Alliance 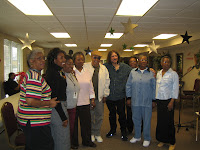 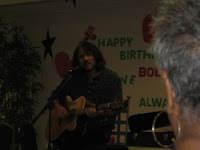 The North American Folk Alliance is having its annual convention in Memphis this week. The Opera is helping them schedule outreach performances in the community. Today I took a songwriter from Woodstock New York, Tom Pacheco, to an assisted living community in Memphis. Initially I was a bit skeptical, what is this white New Yorker going to be able to say to retired African Americans from Memphis? He launched right in, singing a blues song he'd written and he won them over into laughter with a song about an old lady with her own marijuana garden. You can hear this song when you click on Tom's website.

My favorite song was one he did in the manner of Luke the Drifter--a recitation about hardened criminal who is made whole by a stray kitten.
Posted by Michael Ching at 8:38 PM No comments: 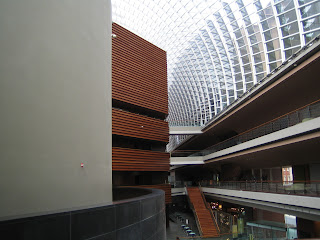 The Kimmel Center, home to the Philadelphia Orchestra is right down the street from the beautiful old Academy of Music, home to the Opera and Ballet. From the outside, Vinoly's Kimmel Center isn't all that distinctive, but inside, the dome holds two theatres, Verizon Hall and the Perelman Theatre. The interior contrasts are very striking. I'm sure this isn't an original observation--the effect reminded me of Norman Foster's dome and great court of the British Museum.

Since the orchestra moved out of the Academy of Music, the opera has been able to drastically increase the quality of its productions, since it doesn't have to set up and strike scenery to accommodate the orchestra.
Posted by Michael Ching at 8:33 PM No comments: 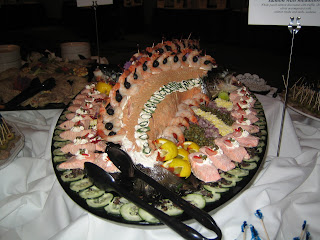 I just managed to get this photo off my camera from our Wild Game Dinner a couple of weeks ago. The Chef, Ed Nowakowski, makes works of art on a platter. It's one of the few special events where you can truly go for the food.
Posted by Michael Ching at 9:04 PM No comments: 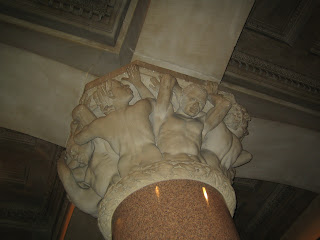 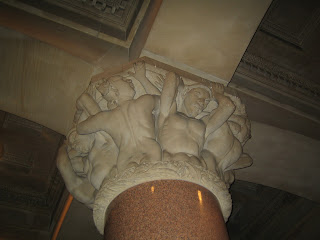 Inside Philadelphia's city hall there are four columns. The symbolic idea appears to be that four races, distinctly segregated, hold up the government. I got shots of the Asian and African ones. Click on the pictures for the full effect.
Posted by Michael Ching at 8:22 PM No comments: 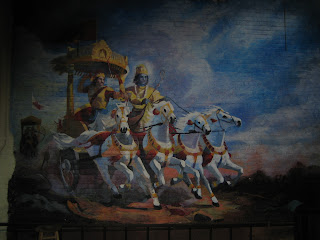 The Bikram Yoga studio in center city Philadelphia has this large mural on the back wall of Arjuna being led to victory by Lord Krishna. It's a lovely studio with lots of laid back character.
Posted by Michael Ching at 8:11 PM No comments:

Singing for A. H. keeps you young?

Check this story about Johannes Heesters who is still singing at 104. There are utube links too.
Posted by Michael Ching at 3:46 PM No comments:

Next year, we are going to do LA TRAVIATA, TREEMONISHA, and FAUST. We're particularly excited to bring Joplin's seldom performed show to Memphis. TREEMONISHA was never performed in Joplin's lifetime and we are going to do a new version of the show which shows Joplin's difficulty in getting a production of his show, which is set in Texarkana and is about a group of freed slaves trying to better themselves, while fighting superstition and ignorance. TREEMONISHA will play in January 09.

The season opens in October with LA TRAVIATA, starring Kallen Esperian and closes with Caroline Worra and Adam Klein singing Marguerite and Faust in FAUST. There's more about this at the Opera Memphis website.

This weekend I'm going to see David Di Chiera's new opera CYRANO at Opera Company of Philadelphia.
Posted by Michael Ching at 10:54 AM No comments:

Polaroid is going to stop making film for its instant cameras. I still have the audio equivalent--lots of cassette tapes, quarter inch reel-to-reel tapes of old piano recitals. Even digital audio tape (DAT) isn't used very much any more. Pretty soon the TVs in my house are going to be dinosaurs too.

We try to make art, music, and literature to last, but even something as ageless seeming as Mozart is only 200 some years old. Hopefully Mozart won't seem like Polaroid some day. Technology marches on; hopefully art loses its utility at a slower pace.
Posted by Michael Ching at 5:52 PM No comments: 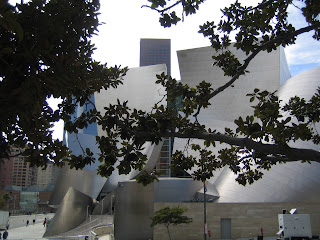 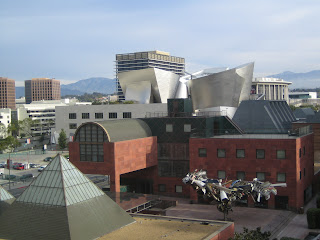 In the foreground is the Museum of Contemporary Art (MOCA) and behind the Gehry building on the right is one of the other buildings in the Music Center complex, the Dorothy Chandler Pavilion which houses the opera house.

It was a treat to see the famous Tristan John Treleaven in the title role in Wagner's four and a half hour marathon opera.
Posted by Michael Ching at 9:48 PM No comments: 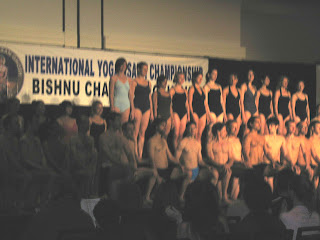 While in LA, I happened to be there on the same weekend as the International Yoga Asana Championship. Sponsored by Bikram's Yoga College of India. Our local Bikram studio owner, Lori was in the competition, representing Tennessee. Although I wasn't able to see her perform, I did manage to see an hour or so of the men's competition before having to go back to things operatic. There were some bendy men!

Unfortunately, out of respect for the concentration of the contestants, I wasn't able to use a flash, so most of my pictures came out fuzzy.
Posted by Michael Ching at 9:39 PM No comments:

In LA to see Tristan and Isolde

I stopped by the Japanese American National Museum in Los Angeles' Little Tokyo. The museum has some rather static but moving exhibits in a beautiful building. The highlight was meeting a docent/volunteer named Mary who was an elegant woman who had been in the internment camp at Gila River for two years. Mary was quite particular about calling the camp a concentration camp and that the concentration camps in Europe should be called extermination camps. She was a living representation of a part of Japanese Amercan history--look for her if you ever go to the museum.
Posted by Michael Ching at 9:27 PM 1 comment: