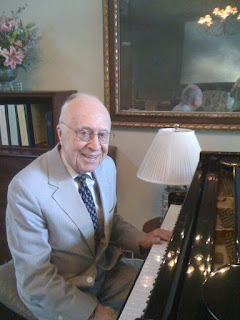 While at Opera New Jersey, I stayed at a lovely retirement community in Hightstown called Meadow Lakes. I met several of the residents and one of the many remarkable ones is Don Smith. Don turns out to have been a pianist at the New York City opera in the late '50s. He is the pianist on the original recording of Douglas Moore's BALLAD OF BABY DOE which was conducted by Emerson Buckley. He played a production at Dallas Opera starring Maria Callas. In addition to Opera, he was the rehearsal pianist for the Ed Sullivan Show and then at Radio City Music Hall for three decades. Don keeps his piano chops up and plays classical music and classic pop songs.
Posted by Michael Ching at 6:59 AM