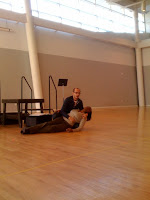 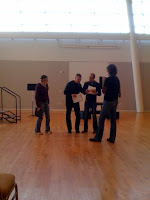 We have had several days of staging on our ORFEO ED EURIDICE in Memphis. We have cast three different singers, countertenor Nicholas Tamagna, tenor Marc Schreiner, and mezzo soprano Kathryn Cowdrick. We have one Euridice, Kearstin Brown--so she's a busy one. Each singer will get to sing the opera twice.

Why do it with three different leads? Gluck's opera was originally done by a castrato (approximated by a countertenor today) and then by a tenor. Later it was taken up by mezzo sopranos. So all three voice types are part of the performing tradition of the piece. I'm sure it's been done this way somewhere before, but it's rare.
Posted by Michael Ching at 9:01 PM