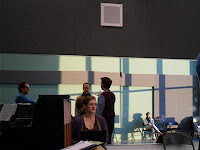 After several snow delays, it is good to be able to be back watching rehearsal. Director Gary John LaRosa has been wonderfully collaborative with the cast and also very detailed in getting the text to work just right. For example, he made the useful suggestion that we change lanthorn to the modern lantern.
We had our first rehearsal with both the cast and voice orchestra present (except for getting ready for the preview). Although it might have been a bit scary in a handful of spots, it is clear that the opera acappella concept is going to work well, even spectacularly in some spots.
Posted by Michael Ching at 8:16 AM