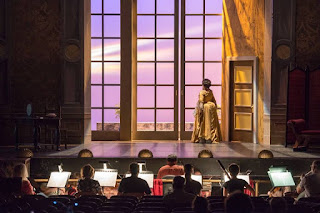 So, over my objection, Nickel City Opera's founder Valerian Ruminski wanted me to conduct our recent June 2015 MARRIAGE OF FIGARO and also play the recitatives. Although I have done it before, I've always thought it to be a bit of hot-dogging and generally avoided doing both at once. Because of the extremely cramped pit, it turned out to be both a practical and artistically interesting decision. Although it's not quite clear whether Mozart used a harpsichord or a fortepiano, it is clear that he conducted his operas from the keyboard and used the instrument during the musical numbers to help set the tempi. As is mentioned in this article by John Drummond, one of the unexpected advantages was it increased the cohesion between the musical numbers and their recitatives. The small pit at the Riviera Theater made large conducting gestures unnecessary, so it became very tempting and fun to play along, which seemed to have a good effect. It felt a little like how I remember Count Basie playing along very sparsely with his orchestra and giving very few cues.You can see in this photo of dress rehearsal that the pit is so small that the winds are actually outside of the pit and face the stage. It was the first time that it felt like an advantage.

Posted by Michael Ching at 1:59 PM