An honor to do the honors 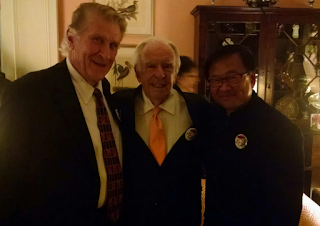 This past Saturday in Savannah, the Savannah VOICE Festival and VOICExperience presented their annual Milnes Award. The honoree was Carlisle Floyd and as a former student I was given the chance to introduce him and to present the award along with Sherrill Milnes and Maria Zouves. Work with Carlisle, along with training to write songs, were the two things that gave me the courage to be a composer/librettist, something I turn out to be pretty good at.

If you're interested, you can read my remarks. It was a wonderful chance to thank a teacher in public, something we don't often get to do.

"Ladies and Gentlemen, if I were to tell you that Edgar Allen Poe or Herman Melville was here to night to receive an award, you'd be impressed. Well, unlike American literature, American opera is less than a century old and its first generation of creators are still within living memory. Here's an example. Although, there aren't many people still around who were at the 1936  premiere of Gershwin's PORGY AND BESS, last month in Amarillo, I met a couple who were at the premiere of Douglas Moore's great American opera, THE BALLAD OF BABY DOE. That was in 1956. And Although Gershwin and Moore and others like Robert Ward or Gian-Carlo Menotti are gone, Carlisle Floyd is still with us, is with us here tonight, and has even just finished a new opera.

Floyd's 1955 opera SUSANNAH is one of the first four or five full length American operas to enter the operatic repertoire. What does it mean when I say that? it means that it stands up to THE MARRIAGE OF FIGARO, RIGOLETTO, or CARMEN. It holds its own, alongside THE FLYING DUTCHMAN or MADAME BUTTERFLY. It is a breathtaking accomplishment. It's like being at the top of a high cliff where most of us can only stare up from the bottom and shake our heads in astonishment. And Carlisle's initial success was no mere stroke of luck. He has built a body of works that will last, works such as OF MICE AND MEN, COLD SASSY TREE, WILLIE STARK and the upcoming PRINCE OF PLAYERS which will have its premiere in Houston this Spring, sixty years after the premiere of SUSANNAH. Comparisons with Verdi are, in my opinion, inevitable.

Carlisle's work has set a high standard for those of us who would try to follow him and his advice to would-be opera composers and librettists has been outstanding. Here are just some of the tips: find the crisis and passion, map it all out carefully in a synopsis ahead of time, and my personal favorite--avoid cliches.  Ladies and gentleman, I don't know if you are aware of this but I am a student of Carlisle's. And the fact that ALICE RYLEY seems to be working as well as it does, is in no small part due to my study with him.

It is my pleasure, honor, and sheer delight, along with Sherrill Milnes and Maria Zouves to bestow the Milnes Award for 2015 to composer Carlisle Floyd."