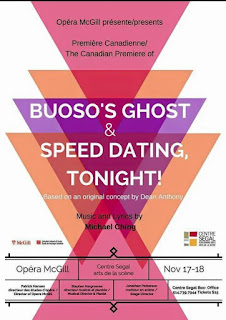 Had a lovely couple of days watching rehearsals of both of these shows and interacting with the student singers and composers at Opera McGill. Although they don't belong together, the two operas should still make for a fun evening. Seeing BUOSO (1996) is like seeing a grown up child. It's completely familiar, it's part of you, but it's also at least a little bit distant.

The collaborative nature of SPEED DATING TONIGHT! with the selections and assignments varying from production to production makes it seem almost like a new show every time. In this version, for example, the pathological liar is played by a female, and a couple of the shows most standard songs "I've always liked this bar," and "Do you like cats?" were both cut.

Thanks to bearded old friend and colleague Patrick Hansen for programming the two works. Patrick actually directed the premiere at the Pittsburgh Opera Center at Duquesne. And thanks to Jonathan Patterson and Stephen Hargreaves for their parts in the directing and music directing.