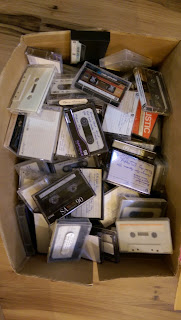 I was too busy last summer, so this summer I took July off, at least in the sense of not being on the road. Some home renovations included the floor of my studio, so it has been a good time to throw stuff out and reorganize. I've kept two scanners busy--sometimes both at once, digitizing old programs and contracts.

I have lived through an age of technological change for the way music has been recorded. I have reel to reel tapes, cassettes, Digital Audio Tapes (DAT), CDs and digital files. I have 5.25 floppy disks, 3.5 disks, and something called an Imation Super Disk.

I've spent the last couple days converting cassettes into digital files. The only way to do it is to actually play them. There are some moderately depressing aspects--piles of tapes of songs that never got heard by anyone--but many good things. Just a few of the notable performances are an orchestra piece called FLOOR EXERCISES which imagined an olympic gymnastic competition. Each piece was preceded by witty narration by David Manning. My music doesn't rise to the standard of David's delightful parody. It was performed in the mid-eighties in Durham, North Carolina. Another great performance was BUOSO'S GHOST at Chicago Opera Theater in 2000. It was beautifully conducted by their maestro at the time, Lawrence Rapchak.

I've always found getting rid of stuff a bit difficult, but I was inspired by this article about Marie Kondo in the New York Times.

I'm probably going to end up sending a big box of cassettes to Washington state for recycling. Fortunately they can go "media rate."

Posted by Michael Ching at 6:45 PM