Letter about style from Iain Hamilton, 1978


As I mentioned in an earlier post, I'm trying to clear out my archives. Scan it, digitize it if it's interesting, and usually throw it out. Every now and then something pops up that is worth looking at, listening to, and cherishing.

I found a letter from 1978 from my first composition teacher at Duke, Iain Hamilton. He had resigned his position to focus on composition. Until Duke figured out what to do about a composition teacher (eventually they hired Robert Ward, for which I am eternally grateful),  I went over to take composition at the North Carolina School for the Arts and one of the teachers there I found nettlesome because of his modernistic, atonal approach to composition. Back in those days, writing in that style was more de rigeur than it is now, thank goodness. I love rereading his words: 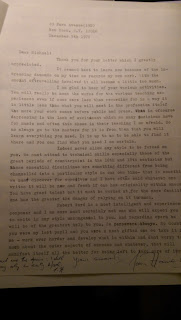 "Indeed never allow any style to be forced on you. We must attend to technical skills especially those of the great periods of counterpoint in the 16th and 18th centuries but those essential disciplines are something different from being channeled into a particular style in our own time--that is something we must discover for ourselves and I have often said whatever one writes it will be new and fresh if one has originality within oneself."

In opera, I've always found style to be a situational device, to be influenced by the story line and characters. Shows like SPEED DATING TONIGHT! deliberately juxtapose a variety of styles to match the variety of daters. Other operas like my recent ALICE RYLEY, CORPS OF DISCOVERY, or SLAYING THE DRAGON deal with cultural clashes that are depicted through musical styles.

Dr. Hamilton was a shy, formal man with a twinkle of humor. I always remember him letting me into his office for a lesson and then scurrying behind his desk to look at my weekly scribblings. A catchphrase I remember was "There's nothing you can't learn from ____" (Mahler, Bach, Mozart). His operatic work was not done all over the US, but there was a production of his ANNA KARENINA at the Los Angeles Opera. Here's the last page from the piano vocal score in his tight, efficient calligraphy. 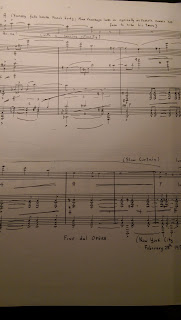 Posted by Michael Ching at 8:49 AM