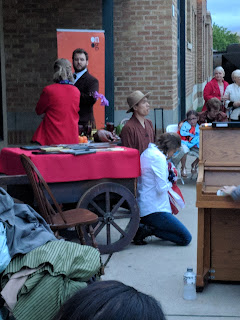 In May, Utah Opera premiered four minioperas, part of the celebration of the 150th anniversary of the completion of the Transcontinental Railroad. I was fortunate to have been selected to write one of them, COMPLETING THE PICTURE, with my very old friend, Victoria Panella Bourns. Everything went smoothly at the first performance in Brigham City, but the next night in Ogden, the power went off midway through the show. My opera had already been done, but they completed the program outside as the sun went down.

COMPLETING THE PICTURE is a short S/A/T/B piano opera about the contribution made by Chinese workers who built the railroad from the west over the Sierra Nevada mountains.