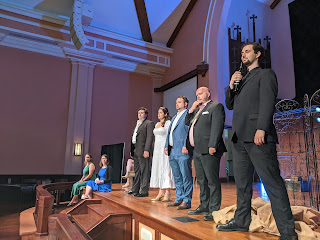 Royal Feast cast
Last week, Savannah Voice Festival presented a staged workshop of my new opera, A ROYAL FEAST. An idea suggested by Executive Director Maria Zouves, FEAST is a sequel to Rossini's LA CENERENTOLA. It is part of a partnership SVF has with the Esther F. Garrison Middle School for the Performing Arts, a wonderful public school in Savannah. Previous projects have included a production of Rachel Portman's THE LITTLE PRINCE and HANSEL AND GRETEL.
The opera was conceived with the help of a group of student writers and composers. With their background in American (Disney) interpretations of Cinderella, the writers wanted critters--lots of critters. They wanted the sisters to learn to get along. And they wanted more magic. These things are, to varying degrees, not in the Rossini.
FEAST was scheduled to be workshopped in the summer of 2020, but the festival was cancelled due to the COVID-19 pandemic. During the fall of 2020 we managed via zoom to create two songs with a group of a half dozen students. These songs are now in the show. Before the emergence of the Delta variant of COVID, the Garrison Middle School students were supposed to perform in the workshop live, but the COVID resurgence did not make that possible this summer. Instead, we filmed them in their songs and even sang along with them once.
ROYAL FEAST uses the Rossini cast--Angelina, Ramiro, Dandini, Magnifico, Clorinda, and Tisbe along with a wide array of new critters, including mice, sea gulls, spiders, snakes, cats, birds, and other animals. The premise is, after the wedding at the end of Cenerentola, the family goes to a party thrown in their honor by the critters.
Inspired by the workshop, I'm filling in some parts of the plot and characters with plans for a full production in a coming season in Savannah.
Thank you to SVF, Garrison, the directors, cast, and the students!
Posted by Michael Ching at 9:33 AM