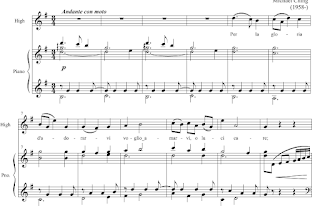 Several years ago I did some arrangements of the old Italian songs. They were premiered by the artists in residence at Opera Memphis. One of them was Per la gloria d'adorarvi. A few years later, I borrowed the arrangement and put it into Speed Dating Tonight! #29-#30. The idea is that the daters are talking while the song is playing in the background. Because of balance, it's tricky and the singer singing the song can cover the daters.

We are giving it another try right now at Taos Opera Institute, where we will be doing Speed Dating Tonight! for the second time in late June 2022. Here's a lovely phone recording of one of the participants Gabriel Chona Rueda, who is a student at University of British Columbia.