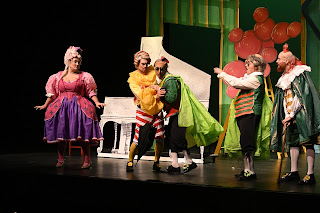 Just had a great time doing BARBER OF SEVILLE in Amarillo. The cast (pictured: Ashley Dixon, Andrew Brown, Federico de Michelis, Carlos Santelli, and Tim Mix) was terrific--they sang out in rehearsal practically all the time and were such fun onstage. The production, by Fenlon Lamb, was just right for Amarillo--inventive, lighthearted, and very streamlined.  I am envisioning this as my sixth and last BARBER. My conducting is mostly a process of "stealing from the best" and after six productions I think I've learned lots of lessons from it.

An additional bonus is that I got some nice action photos from my longtime host, Bill Byrd. 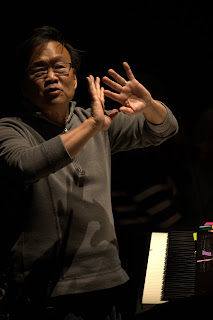 Posted by Michael Ching at 9:39 AM