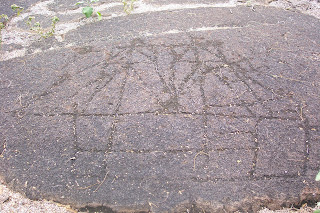 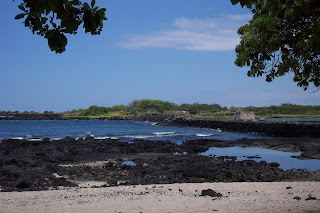 It is an honor to be taken on a tour of Kohala (the northernmost part of the Big Island of Hawaii) by Fred Cachola. Fred is a longtime member of the HOT ensemble and has been in every show that I have conducted in Honolulu. Fred was born and raised in Kohala and is particularly active in Hawaiian affairs. For example, when we got to the visitor center at Kaloko-Honokohau National Historical Park I found out he was one of the people who was instrumental in the creation of the park, which houses restored fishponds that were created by the Hawaiians. The park also has some extraordinary petroglyphs, including this one of a European ship.

Fred is still involved in Kohala, where is currently building a house. Fred has been part of the campaign to keep the Kohala coastline from being overdeveloped and turned into gated communities. My "tour" coincided with a chance for Fred to pass some of his knowledge on to his grandson and to be on-camera for a distance learning class being created by the Kamehameha Schools.
Posted by Michael Ching at 1:36 AM