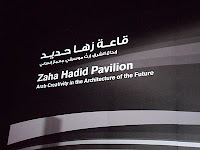 Last night the Abu Dhabi Festival hosted the first of a series of performances at a wonderful portable theatre designed by Zaha Hadid. The concert featured classical chamber music by Carnegie Hall's Ensemble ACJW with a young soprano from the Emirates, Sara Al-Qaiwani. The theatre was set up on the grounds of the lavish and traditional Emirates Palace Hotel.

We were hoping to actually perform at this theater, but because of its intimacy Margaret and I we were moved to a different venue.

The portable theater plays off the acoustics of its surroundings. It doesn't look like it's made an appearance in the United States yet. 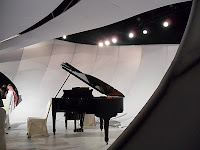 The setting was a remarkable accomplishment. A musical performance is very influenced by its surroundings and the wispy theater created an intimacy--almost feeling like you were hearing music in a tent. 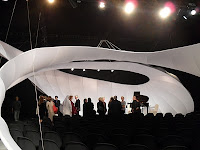 Posted by Michael Ching at 9:04 PM