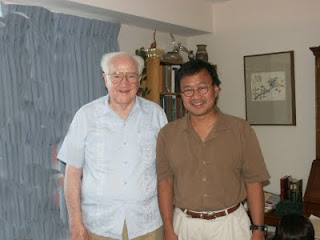 This year the National Endowment for the arts opera honorees include composer Robert Ward. They will be honored at a free concert and ceremony in Washington in October. Although Bob is primarily known for his adaptation of THE CRUCIBLE, he has written several other operas, and lots of instrumental music. Some of those operas-- MINUTES TIL MIDNIGHT--were not so successful, but others, such as ABELARD AND HELOISE, deserve another look. Although well into his nineties, he is still composing, though not so much opera any more. The other honorees include Speight Jenkins, Rise Stevens, and John Conklin.

I studied with Bob and consider him to be my principal composition teacher. The opera I'm writing now, SLAYING THE DRAGON, is kind of my Robert Ward opera. His operas have heroic characters who try to do the right thing, even when society is not looking kindly at them. Bob's musical style was tonal back when tonal wasn't cool and he kept to that style as serialism gave way to minimalism gave way to whatever it is we call what we do now. Bob's most important advice was that if I couldn't play and sing something I had written,  it might not be truly honest writing. He was also a great example of a warm and mentoring colleague, something that I have tried (not always successfully) to emulate. And he's a great example of remaining engaged in one's work as long as one can. I plan to be there cheering for him when the NEA acknowledges him on October 27th.
Posted by Michael Ching at 2:22 PM