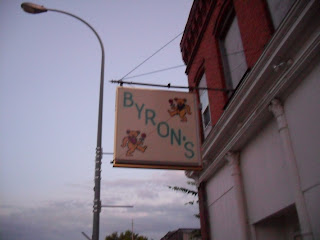 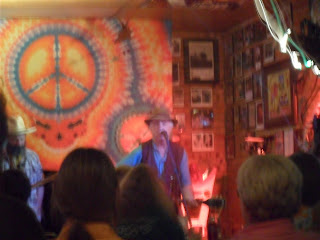 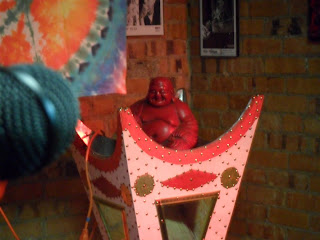 Last night I drove 90 miles up to a little dot on the map,  Pomeroy, Iowa, to hear an old friend, David Olney. Olney has made a career of combining blues rock and a variety of other styles with a wide range of subjects and points of view, including Van Gogh, Jesse James, and baseball players.

There was much to learn from his performance which was structured very much like a classical two act numbers opera. As he got into his second set, he started to run the songs together to build to his finish. He interspersed narration like recitative--sometimes serious and sometimes funny--to introduce his songs. His fellow performer, Sergio Webb, provided a wide variety of guitar styles and rousing solos. David is a master at holding the attention of a barroom concert, where most are listening, but some are not. He isn't afraid to throw in a daringly slow and contemplative song about Van Gogh in the midst of songs about love gone wrong, or men gone bad.

Byron's Bar has a great vibe. There is the usual Iowa and Iowa State memorabilia, and pictures of previous acts--and an extensive Grateful Dead shrine--but also a tie dye backdrop and a Buddha in the upstage corner of the little stage. Byron himself presides over a doorprize giveaway that included plungers, jump ropes, and koozies.

The room was full to capacity and everyone clearly enjoyed David and Sergio. I'll be back in Pomeroy again someday.

Posted by Michael Ching at 1:46 PM